On Friday I had my two week follow-up appointment with my surgeon who said that I’m recovering really well and I even made the guy laugh! He’s a little concerned about my weight loss, but more on that in a little bit. Dr. Norton did tell us that out of all the patients who had clear pre-screens before surgery, I had the worst case of cancer in pathology he had seen, which underlined the fact that we made the right decision at the right time. Sometimes it feels like I got on the last boat off the Titanic so there is a lot to be thankful for. Our doctor also told us that the first CDH1 patient at Stanford is working on a book to talk about CDH1 and even has a ghostwriter for it so I’m excited to see what happens.

As far as recovery goes, here’s the update:

Disclaimer: the rest of this post might gross you out, but I think it’s important to talk about the highs and lows of this surgery. Today it’s been 17 days post-gastrectomy and what am I discovering? Meals are a battlefield. The other day I tried a teeny tiny bit of ground beef (think about the size of a Grape Nut morsel) and I literally thought I was going to die. Immediately my body wanted to reject it and spent the next hour and a half trying to get it out. I no longer have the muscle (which was my stomach) to “throw up” so my body tries to spit up food that it disagrees with and it is incredibly painful. It feels like when you swallow a huge piece of meat and it gets lodged in your esophagus, but now you’re lacking that muscle to get it out so your body does what it can. The pain goes from your chest and moves into your back and once it starts, it is impossible to get it under control until I get everything out. This has happened to me a few times a day for the past few of days so it’s a little discouraging. My body starts this sort of “gag” reflex, but it’s not the same, it just starts trying to spit it up, but the length of time the reflex happens seems to be getting better and rarely lasts for more than an hour anymore. Some days are worse that others, and on the days it’s bad, I’m not really in the mood for eating.

I’m discovering that there are certain triggers that make this happen: when I’m eating too fast or not chewing enough and when I drink more than a couple sips of water at once. It’s weird, but my body for the past couple of days seems to panic whenever I eat and wants to reject it even before I get started so I really have to concentrate on relaxing. Some website told me that I should try talking to my intestines and giving it a pep-talk before I start eating, does it work? Absolutely not. I am discovering that it helps to eat while I’m doing stuff, like writing a blog post or cleaning dishes and then chew like I’m a grazing cow.

The “mealtime body panic” seems to get worse when other people are watching, it’s probably all in my mind, but I imagine this is how zoo animals feel when people watch them eat. Once it goes into panic mode, I can’t eat anything for about an hour otherwise it just makes things worse. I’m also discovering that I’m a lot more sensitive to lactose than I was before my gastrectomy. I had a little mac and cheese earlier this week and had massive intestinal cramps throughout the night. I can’t give up cheese and other delicious dairy products, so I’m going to forge ahead using lactase pills and hope they work. So far, as long as I limit the amount of dairy I eat with a lactase pill or two, it seems to work out for me.

I have to keep reminding myself that it’s only been 17 days, so I shouldn’t feel frustrated about not being able to eat like a normal person. Sitting at home and watching Food Network is probably not helping. I watched “Man vs. Food” the other day and reminisced about the good ol’ days when I could wolf down a huge burrito chewing maybe 10 times the entire meal. It’s weird, because I don’t have that feeling of being hungry anymore, but I still have cravings… like for a burrito, steak, sushi, cookies, macapuno ice cream (and other dairy-products), chile rellenos, tacos, kim chi, rice, pasta, a turkey sandwich, burger, bacon, sweet potato fries, nachos, a big dog from O.co Coliseum (for that matter a kielbasa from the O.Co Coliseum), corned beef, bangers and mash, phô, Reuben sandwiches, Vietnamese sandwiches, ramen bowl with a friend egg and spam, spam masubi, pulled pork, and the king of all cravings, the glazed donut. Besides those, I think my cravings are pretty normal… Rumor has it on the east side of San Jose, there is a donut shop that makes a sugar-free donut, sweet glory! Kate will attest, however, to the fact that I still get hangry – which according to Urban Dictonary means: “When you are so hungry that your lack of food causes you to become angry, frustrated or both.”

I’ve been working on my list of what I can and can’t eat, but it seems to change daily. Junk food, unfortunately, I have an easier time eating right now. Yesterday I had a terrible day spitting up everything, but because it was our 6th anniversary, I took Kate to see Divergent where I did sit down and eat almost an entire small bag of buttered popcorn, go figure… Calories are calories at this point and I got 670 in that one sitting. Good golly.

Overall, the foods I can keep down with some regularity: sugar-free brownies, Lay’s potato chips, my protein shake, my protein bars, tortilla chips, certain soups, and Sobe Lifewater. A healthy diet, I know, but we’re taking what we can get as far as calories go. Figuring out how to drink water has been a learning process for me, I really have to focus on taking small sips otherwise I get that reflex feeling. It helps for me to sit down and sip instead of trying to walk and drink at the same time. According to my food journal, I’ve been cruising around 1100-1300 calories and it seems like my weight loss has leveled off. I’m still averaging about a pound of weight loss per day, but that’s a huge slow down from the almost two pounds I was losing per day last week. 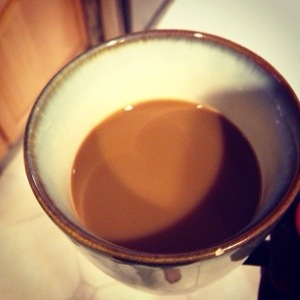 I think the key for me is to celebrate the little victories… like the fact that I can drink a small cup of coffee and had a small sip of soda that actually stays down! I can also remember how awesome it is to cuddle on the couch with my family and remember the journey I’ve been on the past few months. Perspective. Perspective. Perspective.