With another daughter on the way in a few weeks, I decided to hit the road with G-Money to spend some quality time together before my heart starts making room for one more. Now that my brother is home from Korea and working in Los Angeles, a land with warm beaches, hot weather, and delicious food, I really could not think of a better place to spend four focused days with my daughter.

Between sitting on the beach and driving the city, Evangeline and I went on our own post-gastrectomy food tour sampling the finest coffee roasters the Southland has to offer paired with some delicious toddler-approved fare. Our first stop was at a Japanese-American fusion burger joint called the Humble Potato  known for their version of the American classic which they call the hambága. Since I no longer eat red meat, I decided to go with the Tempeh with Karê which is an Indonesian soy patty chopped up with an Indian tasting spice/curry over slaw with a fried egg on top. Do I miss eating burgers? Absolutely, but living in California means there will always be plenty of options. For those who know me, food tours are incomplete without visiting new coffee shops. Before getting off the plane I knew I needed to pay homage to the place that combines my two passions: motorcycles and coffee, Deus Ex Machina in Venice Beach.

Deus Ex is “hipster” in every sense of the word which means plenty of mason jars, restored wood, beards and custom built café racers. If you want a $40 t-shirt only other motorcyclists will understand, this is the place to go. The top coffee spot on our tour, however, goes to what OC Weekly dubbed as the finest coffee roaster in 2015, Portola Coffee Lab in the swanky gastronomic haven located at the OC Mix. After a quick Gibraltar, we sampled various cheeses at a neighboring cheese bar. One of the perks of a stomachless life is how surprisingly satisfied you feel from eating samples especially something as calorie dense as cheese, nuts and coffee. 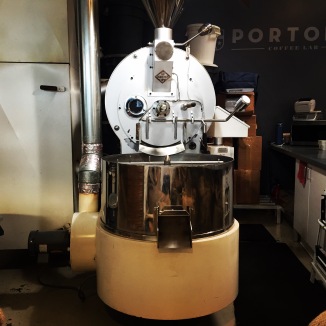 As a bit of a nutritional aside, while this past year and a half has been quite a nutritional odyssey; battling stints of hypoglycemia (there is a very interesting article on this syndrome as it relates to total gastrectomy patients and b12 deficiencies which can be found here), I have found it best to keep my carbohydrate intake around 100 grams a day and proteins over 100 grams which, in general, keeps my blood sugar spikes to a minimum as long as I stick to complex, natural low-glycemic carbohydrates like sweet potatoes and fruit. When I want to splurge for my ice cream fix, I make sure to take it out of my carbohydrate allowances for the day. Staying within 100 grams of carbs has been holding everything in balance and keeps me honest so I don’t get dumping syndrome or hypoglycemic when my insulin levels spike. In a lot of ways, I really have learned a lot from the diabetic community in regards to my blood sugar balance. As for my weight, even with triathlon training, I have been consistently between 160-165 lbs for the past few months.

After the unexpectedly pleasant pairing of cheese and coffee, we made our way back to Anaheim to visit an upscale food court known by locals as the Packing House where we met my brother and his wife for a gourmet hodge-podge of kid-friendly fare which included southern style chicken wings, mac and cheese, fries and the fanciest popsicle stand you have ever seen. Pistachio gelato popsicle dipped in dark chocolate mint covered in hazelnut and coconut shreds? Yes! Between the live music, dancing with my daughter to a Mumford and Sons-esque rendition of “I Want You To Want Me” and epicurean popsicles, I would say day 2 of our trip was a success.

The remainder of the trip was spent at “happiest place on earth”, Disneyland. Outside of being the hottest weather of the year, we had an amazing time just the two of us. As a kid I loved Disneyland, but it’s hard to quantify the pure joy of seeing your toddler ecstatically chasing after Woody, Mickey and Elsa as they walked around in a sweaty suit. What made the trip even more special was randomly running into some friends from home, a couple former students, and reconnecting with a good friend I made on my trip to Israel in 2012. 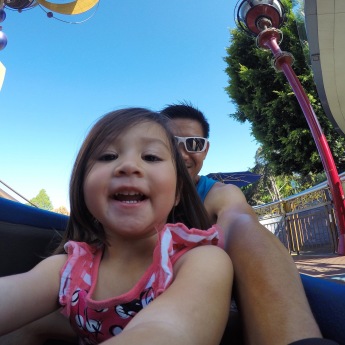 After a long day in the park, I had given Evangeline a shower, put on her pajamas and was starting our bedtime routine when she paused and asked me, “daddy, where is your daddy?”

The question literally made me tear up immediately. After everything that we experienced over the past four days, this question flooded my heart with emotion. Evangeline is fortunate enough to know both Kate’s parents and my mom, but for the first time she realized that she had never met my dad. After a few seconds scrambling to think of an age appropriate response to a two-year-old, I decided to tell her the truth, a topic Disney has never shied away from addressing. From Big Hero 6 to Inside Out to Bambi, Disney has never been afraid to talk about the harsh realities of life and death. In that split second between Evangeline’s question and my response, I distinctly remember wrestling with the feelings I had watching the stampede scene from the Lion King about a year after my dad had passed away.

Conjuring up all the tender love I could, I put her in my lap and said, “My daddy got really sick when I was little and he died.”

“oh…”, she responded. I could tell her little mind was trying to understand.

Recognizing there will be many more conversations over time, that night, I just held her close and said, “Daddy loves you very much and you don’t have to worry. Because I have this scar, daddy is going to be around until you’re a young lady and I’m an old man.”

I followed this up with lots of kisses and hugs before putting her down in her crib. As I shut the door, I said, “I love you” one more time and sat on the couch reflecting on 31 years of life and put the past year and a half of hypoglycemia, dumping, sweating in movie theaters, spitting up, and intense stomach cramps into perspective once again because of one honest question from a daughter to a father.

There was an error retrieving images from Instagram. An attempt will be remade in a few minutes.