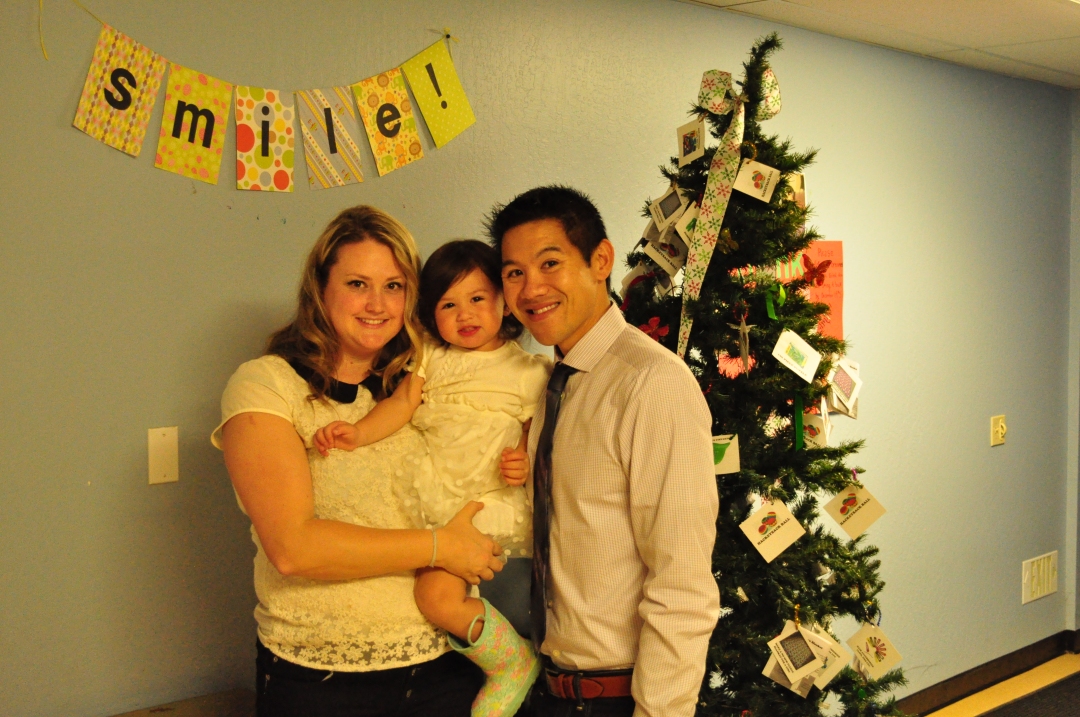 A few days before Christmas in 1993, my dad passed away of stomach cancer and every Christmas since has not been the same. As a result, I became a Christmas Grinch. My “grinchness” had nothing to do with presents, consumerism, or fighting for the “soul of Christmas”. For me, it was purely a deep sense of loss I felt around the holidays when the other kids in school were making Christmas cards for their parents. This loss left unattended over the years caused my heart to shrink two sizes small. Many years later, I have profound empathy for those of whom this season is not so jolly. My heart is tender towards others for whom this season accentuates the missing seat at the table. Since we started dating in 2002, Kate’s been trying to change my mind ever since, but for some reason I just could not jar that feeling of loss enough to really enjoy Christmas. I know it sounds strange coming from a pastor to have a malaise around the Christmas season surrounded by all of the “fa-la-la-la-laa’s”, but there was a deep healing that needed to take place. My ministry around this season since becoming a pastor is about acknowledging others for whom this season is difficult and pointing them towards the deep hope the season of Advent represents: that God is not far off in the distance, but in a real way, God with us “Immanuel”, Matthew 1:23.

One theologian and pastor likens the season of Advent to the time of waiting and anticipation between Mockingjay, Part 1 and Mockingjay, Part 2. Like the books, we know the end of the story, but until it unfolds, we wait with eager expectation. The church, therefore, approaches each Advent season with a renewed sense of hope reminding each other of the truth, as it was from the beginning of creation, continues to remain true for us today: God has not, and will not abandon His people. We remind each other in this season that God is in the business of taking the darkest and most hopeless situations and saying, “let there be light!” and as He brings the darkness to light, new life emerges. This is the good news of Advent, that a little child born to a young, unknown family in the middle of nowhere, can change everything. Can a child change everything? Yes.

During Thanksgiving week my little brother went into surgery to replace the damaged valve in his heart. While he also tested positive for CDH1, the surgical team determined the heart to be the most pressing as he could literally drop dead at any moment. After the successful surgery the surgeon told us Austin had the worst congenital heart disease he had ever seen and when it failed, he would have died within a few minutes. My brothers heart surgery landed him in the ICU at Stanford for the first few days of recovery. It goes without saying, but ICU’s are intense. Walking into the North Wing Intensive Care there is a room on your right with soft lighting, couches and tissues. Lots of tissues. Bad news takes place in there and every time I walk past it, that is all I can think about. A couple times during my visits with Austin an alarm would go off on the unit sending everyone into a frenzy, shouting codes and room numbers. Like I said, intense. Kate as a nurse in the Emergency Department tells me that you learn to deal with death, not that it stops bothering a person, but to distance yourself from it otherwise you cannot function. As a result nurses can develop a certain edge about them because they have to protect themselves. I was wrapping up my visit with Austin one afternoon and was walking out when a family entered the unit holding a baby that could not have been more than a year old. Immediately, I saw the battle hardened floor nurses surround this baby with cooing and baby noises. In the middle of a unit constantly surrounded by death, these hardcore ICU nurses smiled, softened and greeted this baby because she represented hope. In that moment, there was an acknowledgment that there is more to this life than what this floor experiences everyday. In the middle of this floor, we were all being reminded of the hope and beauty of life that can take place in the midst of chaos. So can a child change everything? Absolutely.

The more that I began to recognize this aspect of Advent and the Christmas season, the more I am convinced that if Christmas is for anyone, it is for brokenhearted people in need of hope, it is for you, it is for me. For 12 years Kate has been trying to change, or I should say redeem, Christmas for me. This tumultuous year for the Dang’s was filled with 4 hospital stays, 3 bowel obstructions, 2 surgeries, 1 hernia and a partridge in a pear tree, but despite the challenges, this Advent season means something just a little bit different. I watched my daughter Evangeline perform in her first Christmas show put on by her preschool. As she sang “Twinkle, Twinkle” with her class and did the hand motions, she constantly was looking back to make sure we were paying attention and we cheered her on. In that moment, I recognized that Christmas no longer has to be about that deep sense of loss, but of renewal and new life because God is with you… and me.

4 thoughts on “Advent: Mockingjays and ICU’s”